Make dinner extra special with these penne alla vodka with salmon. Fresh chunks of salmon are shallow-fried and then smothered in a creamy sauce with a dash of vodka in it for a subtle, yet unmistakable flavour. You won’t get tipsy, but your taste buds are going to have a ball!

What is it about a dash of alcohol that makes food taste so much better? And I don’t mean a glass of wine with dinner — I’m talking about alcohol IN the food.

One of the best pasta dishes I know how to make is a Creamy Whisky Pasta with Smoked Salmon. It’s so good that I always have a bottle of smoked whisky in the house to make them (and I don’t even drink whisky).

These penne alla vodka with salmon take the classic idea of pasta alla vodka a step further. I use fresh salmon to make them, which I fry until it’s just a bit crispy (not too much, or it will be too dry).

After frying the salmon and adding some vodka to the pan, I make a white, creamy sauce that’s super simple, but so, so delicious. the result is a creamy salmon pasta that has a hint of something special, but don’t worry, you won’t be able to actually feel the vodka.

What do you need to make this salmon and vodka sauce?

To make these penne alla vodka with salmon, you only need a handful of ingredients.

Pasta — even though this recipe is called penne alla vodka, you can actually use any other type of short pasta you have on hand. I like to use penne rigate for this recipe because they have those ridges that make them perfect for this kind of sauce.

Salmon — fresh boneless and skinless salmon is perfect for this recipe. If you have a piece of salmon with skin on, I suggest you remove it for this recipe (even though it’s perfectly fine to eat). Cut the salmon into 1-inch cubes before adding it to the pan.

Shallots — if you don’t have shallots, red onion would also work well in this recipe.

Vodka — any type of vodka would do, but my advice is to use a type that you wouldn’t mind drinking. This goes for any recipe with alcohol in it — use the kind of wine, whisky, or anything else that you wouldn’t refuse a glass of. It goes without saying that you need regular, plain vodka for this salmon pasta sauce, not something that’s flavoured.

Double cream (heavy cream) — if you want to cut down on the calories a bit, you can use single cream (half and half) instead. Because this is not as thick as double cream, you may want to cook it for a couple of minutes more to allow the sauce to thicken.

How do you make this pasta with salmon and cream?

This recipe takes just 25 minutes to make, so you’ll have dinner ready in no time. You can actually do it all while you cook the pasta.

Start by bringing a large pot of water to a boil (salt it when it reaches boiling point, not before, because unsalted water reaches that point faster).

When the water is boiling, add the pasta and cook it 2 minutes less than recommended on the package. Remember to reserve 1-2 cups of pasta water before draining the pasta.

Meanwhile, heat the olive oil in a pan and fry the salmon over medium heat for 5-6 minutes or until it’s done to your liking. Remove the salmon from the pan and set it aside.

In the same pan, melt the butter and fry the shallot for 1-2 minutes until it softens. Add the garlic and chilli flakes and cook for another minute.

Transfer the salmon back to the pan. Add the vodka and cook for 1-2 minutes until the alcohol evaporates.

Next, stir in the double cream and cook for another minute.

Transfer the pasta to the pan and toss it well until it’s well-covered in sauce. If the sauce looks too thick, add some pasta water.

Stir in the grated Parmesan and dill and season with salt and freshly ground black pepper.

If you liked this recipe for penne alla vodka with salmon, have a look at some of my other quick pasta recipes: 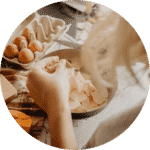